This week's post is written in honor and memory of Nelson Mandela, one of the most influential leaders of the 20th Century.  Mandela died last Thursday. 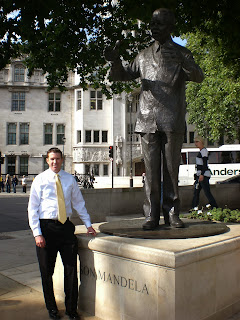 You know someone is a big deal when their likeness is cast in bronze in a prominent place in a major World City 6,000 miles away from his home country.  Thus it is with Nelson Mandela, whose statue resides near Westminster Abbey in London.  To give you an idea of the impact of this man on the World stage, consider this fact: The only other non-British statue I saw in the vicinity was of Abraham Lincoln.

A key component of Self-Action Leadership is Emotional Intelligence.  This includes the capacity to allow your heart to be changed, rejecting feelings of bitterness, anger, and revenge to embrace emotions of peace, compassion, empathy, and forgiveness.  This means developing the kind of inner strength where your central identity is no longer a victim of external realities beyond your control, but is rooted in your freedom to control your thoughts, speech, and actions.
Mandela was once guilty of sedition and conspiracy to commit violence in an attempt to achieve his political aims.  While his quest began by practicing Gandhi-esque civil disobedience, it ultimately evolved into a rasher variety of martial resistance.  Regardless of the ends Mandela and his cohorts were targeting, their means were both illegal and morally questionable, to say the least.  As a result, his famous imprisonment was not, as some may mistakenly assume, entirely unmerited.  Had his story ended in prison, or in his release and return to bad habits, his legacy would have turned out very differently.  Mandela himself has suggested that his imprisonment was a blessing in disguise because it may have prevented him from harming others unjustly.

But something happened in prison that changed his heart.  27 years is a long time to think, and Mandela did a lot of it behind bars.  Instead of allowing himself to grow increasingly hateful of his prejudiced and bigoted captors, Mandela began to exercise the only authentic power that he -- or any of us -- have as Self-Action Leaders: The power to control his thoughts, speech, and actions.

Inspired by the William Ernest Henley's great poem, Invictus, Mandela began to discover the power he held in his hands to transcend the victimhood he had previously felt under the unfair system of Apartheid.  By the time he was released from Prison 27 years later, he was truly a changed man.

Building on the foundation of inner freedom he developed in prison, he abandoned his former attempts to harm the antagonists of his people's equality, and his influence began to emanate throughout his country and the World.  Carefully and compassionately riding the wave of his well earned moral authority, he eventually rose to the top office in his country, and the rest -- including Apartheid as South Africa once knew it -- is history.

I have great respect for this remarkable leader and man.  Nelson Mandela's life is evidence that we can have our very natures changed if we are willing to do our part to ponder, pray, reflect, work, wait, and persist in hardship.  I pay homage to his memory, and honor his legacy in hopes it will continue to positively impact the people of this World.

In our busy World that revolves around technology, information, and entertainment, it is easy to get so caught up in it all that we fail to take time out to ponder -- and I mean really ponder -- life's meaning, purpose, vision, mission, values, and long-term goals.

The Self-Action Leadership theory and model are designed to show you how to take the time and effort -- without having to spend time in prison -- required that leads to emotional intelligence and higher levels of Self-Leadership Efficacy.


Out of the night that covers me,
Black as the Pit from pole to pole,
I thank whatever gods may be
For my unconquerable soul.

In the fell clutch of circumstance
I have not winced nor cried aloud.
Under the bludgeonings of chance
My head is bloody, but unbowed.

Beyond this place of wrath and tears
Looms but the Horror of the shade,
And yet the menace of the years
Finds, and shall find, me unafraid.

It matters not how strait the gate,
How charged with punishments the scroll,
I am the master of my fate :
I am the captain of my soul.”[1]