Over the weekend, Lina, Tucker, and I had the opportunity to attend the Wings Over Houston Air Show featuring the world famous Blue Angels of the United States Navy.  In conjunction with the Thunderbirds of the U.S. Air Force (see picture below), which we saw a few years back in Atlanta, Georgia, I have seen few things in my life that are more impressive and inspiring.  Watching these remarkable fighter pilots maneuver their F-18 Fighter jets with uncanny precision at such high speeds is something truly special.  Such displays of excellence and power made possible by countless hours of study and training make me proud to be an American.

View a clip of a Blue Angels flyover at Houston's Ellington Air Field on Saturday
Homemade video footage captured on my iPhone.

During the air show, I learned that the Blue Angels have been flying since 1946.  In intervening decades, nine different models have been showcased as official Blue Angel aircraft.  The last model to be used, which also serves as the current version, is the F-18 Hornet and was first unveiled in the mid-1980s.  As I began to do the math in my head, it seemed a little strange that the World's greatest Navy would still be showcasing a fighter model that is nearly 30-years old.  As amazing as the Blue Angels are, you don't have to be a Navy expert to know that fighter-jet technology has improved since the mid-1980s.  While improvements have been made to the F-18 over the years, the recent period is by far the longest span of time in between entirely new fighter models being introduced to the Blue Angels' fleet.

When I got home, I did a little more research and found out that just last year, these famous flight demonstrations of American airpower were cancelled due to federal budget restraints.  Fortunately, that decision was reversed soon after and the Blue Angel's schedule was merely cut back instead of terminated.  I am very grateful for this, or else we would not have been able to see them in action on Saturday.  Nevertheless, I felt sad to know that our government was even considering scaling back, or even worse, terminating, such an extraordinary symbol of American Exceptionalism--not to mention an unparalleled recruiting tool for our military.  It was yet another example of an ever-growing list of signs that our nation is in decline, and has been for some time now.

Are you tired of seeing the decline of your country -- the United States of America?  Are you tired of seeing American exceptionalism de-exceptionalized by pundits, politicians, and members of the intellectual elite?  Are you disenchanted with political leaders locally, regionally, or on the State or Federal level?  If so, there is something you can do about it.  You can go and VOTE tomorrow. 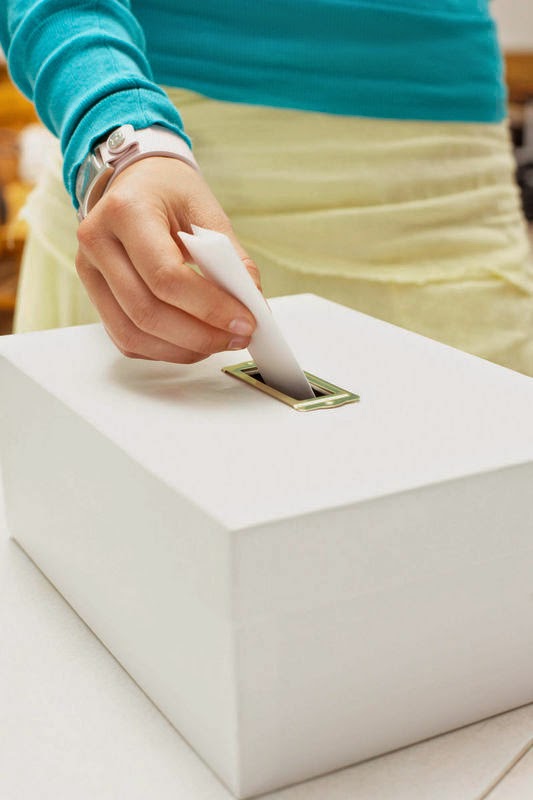 I will be in South Dakota on Tuesday with work travel, but my wife and I had the chance to vote early this past Friday in our home State of Texas.  What a privilege it was to let our voices be heard from this most important of pulpits--a pulpit from which every American has the opportunity to offer up an eloquent sermon of his/her own.

In the midst of our perilously divided and fractured political climate, there are some, perhaps many, who are apathetic.  "What difference will my one vote make?" they query.  I have a good friend who asked me this very question recently.  I shared with her my view that voting is not merely a right, but a privilege and a duty.  If we do not let our voices be heard at the ballot box, who are we to bemoan the results?  It is said that in a democracy, the power belongs to the people.  This is not entirely true.  A more accurate statement would be: In a democracy, the power belongs to the people who vote.

My friend decided to vote.

Freedom Focused is a non-partisan, for-profit educational organization.  As such, we do not endorse specific candidates or become involved directly in political affairs.  We do, however, encourage ALL Americans to exercise their privilege and duty to not just vote, but to study the issues and candidates whereby they might support candidates who champion policies that promote life, liberty, self-reliance, conscience, character, and American Exceptionalism.

Some may agree with the first five of these six principles, but waver on the last.  Perhaps you have wondered, "Who are we to call ourselves exceptional or to assume leadership for the world."  My answer to this question is that as Americans, whether we like it or not, destiny, history, or whatever else you want to call it, has placed us in the role of World Superpower at this juncture of our planet's history.  If you study history at all, you will know that the world has virtually always had a Superpower.  If you study history closely, you will discover that things haven't always worked out so well under former Superpowers.  If you study history honestly, you will discover that despite our imperfections, America has, upon reaching Superpower status, shown unprecedented magnanimity, generosity, and imperial restraint compared to all erstwhile Superpowers throughout history.

If we don't lead, someone else will, and something tells me that most of us won't like the results that all of us will have to live with if American power and leadership in the world is replaced by another, less magnanimous, less generous, less restrained, and less moral and ethical nation or state.  If you care about your country, don't just talk about it; get up and do something about it by voting tomorrow. Some may profess that their vote doesn't really count because they live in a solid "Red" or "Blue" State and their one vote won't turn the tide.  That might be true, but as self-action leaders, we must be continually careful about cultivating habits that lead to long-term achievement and success.  If enough people habitually fail to vote because they have no hope for their region or state, then your state is made weaker by a factor of your non-vote, and the non-vote of every other person who chooses apathy and inaction over caring and action.  Moreover, even if you someday move to an area of the country where you believe your vote will count for more, if you have cultivated habits of not voting for years previous, chances are that bad habits will carry the day once again.

It is an honor and privilege to live in this, the greatest Nation in the history of the World.  As citizens of this great nation, it is the duty of every eligible person to let his or her voice be heard at the ballot box.  Don't abdicate this precious right.  Let your voice be heart by voting tomorrow in the mid-term elections.

P.S. If anyone receiving these blog posts via e-mail is finding the formatting of articles a bit mixed-up, it is not an issue of proofreading on our end, but may be an issue of formatting on whatever computer you are using.  To avoid such issues, just click on the title of the article at the top of your e-mail, and you can view the post in its original format online.  You can also just bookmark the following website address for easy access: www.freedomfocused.blogspot.com
- November 02, 2014