Paying the PRICE to Become a CHAMPION

In my last blog post, I explained what sets SAL apart from other personal development programs on the market.  Today’s email sheds further light on these important distinctions.

After a leader has formulated an intelligent plan that respects Natural Law, HARD WORK becomes the indispensable variable in achieving results and obtaining success.  When it comes to being the BEST—or more importantly, your BEST—there is simply no substitute under the sun for good old-fashioned sweat equity.

All of the world’s most accomplished geniuses understand this principle, which was perhaps best articulated by that incomparable inventor Thomas Edison, who quipped that: “Genius is 1% inspiration and 99% perspiration.”

Regardless of raw talent or access to capital and other resources, TRUE CHAMPIONS are always the ones who want victory the most and are willing to work the hardest to be victorious.  They demonstrate their determination through an undeviating commitment to the goal—and more importantly, to the process that leads to the goal.  They are consistent, persistent, and unrelenting.  They are also always learning and tweaking their approach along the way.  Most importantly, they do not merely persist until a major roadblock crosses their pathway.  They persist until they succeed—come what may.

They NEVER, ever, EVER GIVE UP.

Champions comprehend the price tag attached to authentic growth, achievement, and victory.  Consequently, they do not cut corners in their efforts to succeed.  They diligently adhere to the “Law of the Farm” (Stephen Covey) and “Do not Skip any Steps” (Michael Jordan) in the process.  They also recognize that in the long-run, losing is part of winning.  Therefore, they are not afraid to lose.  Recognizing that the only true failure is to give up on a worthwhile endeavor, their biggest fear is that they will fail to try or put in the necessary effort.  In the inspiring words of basketball’s GOAT, Michael Jordan:

“I have missed over 9,000 shots in my career.  I have lost over 300 games.  Twenty-six (26) times I was trusted to take the game-winning shot—and missed.  I have failed over and over and over again in my life; and that is why I succeed.”

Champions put in the time required to achieve greatness.  You are probably familiar with the “10,000-hour rule” made famous by Malcolm Gladwell’s bestselling book, Outliers.  Champions understand this rule and earnestly seek to put in whatever time is required to succeed at the highest levels.

I know from my own experience the veracity and vitality of the “10,000-hour Rule.”  Regardless of any raw talents or natural proclivities I may possess, I know for certain that there is no substitute for the approximately 20,000 hours I have invested in writing, speaking, and teaching over the course of the past 30 years of my education and career.

This point was confirmed by a piece of feedback I received from a fellow writer back in 2014.  This writer had reviewed the first edition of the SAL textbook, which was self-published in 2006 and targeted a high school audience.  After reviewing some of my blog posts eight (8) years later, she emailed me and said, “Jordan: I just had to write and tell you that your writing is about 10,000 times better than it used to be.”  It was interesting how she employed the number 10,000 in her compliment.  While certainly hyperbolic, she made her point both clearly and symbolically.

Why had my writing improved so much over the course of those eight (8) years?  Because I had been working diligently on the skill and had spent thousands of additional hours studying, practicing, and teaching the art and science of written composition over the course of those eight years.  I had paid the price to become an elite professional in my field.  That was over six (6) years ago, and I have spent several thousand additional hours writing since 2014.

One of the most significant variables that sets the SAL Textbooks apart from other personal development books is that it was not written just once.  Instead, it was written and published SIX (6) times over the course of 14 years—in 2006, 2007, 2012, 2013, 2015, and 2019.  Not only did my own writing vastly improve over that time period, but I also got the input, feedback, and observations of many others who were able to spot things I missed, and otherwise assist me in a variety of areas that greatly improved the overall product.  As such, you can imagine the extent to which the 2019 version has improved upon the 2006 edition.

Answer:  Time, effort, sacrifice, growth, maturity, and consultation with others.

It's simple in theory; but the actual time must be invested to realize real results.  The price must always be paid for authentic and significant success in school, sports, or life.

There is no other way!

The beauty of the SAL Textbooks is that unlike most self-help or personal development material or programs, it invites students to not merely read or review the material in an attempt to get temporarily “pumped up.”  Instead, it challenges students to REALLY STUDY it over extended periods of time in a committed effort to put in the time to become a TRUE CHAMPION.

Bottom Line: The ART and SCIENCE of becoming a CHAMPION requires diligent STUDY over long-periods of time.

That’s just the way things are.

Of all the subjects taught in our high schools and universities, where is the most important class of all?  You know, the one that teaches students how to effectively navigate LIFE ITSELF?  Where is the course that trains young men and women to think critically about the leadership and direction of their own lives?  Among the countless subject offerings in our nation’s many colleges, why are the weightier matters of character, conduct, conscience, and leadership so routinely flouted in favor of a whole menagerie of fringe topics that do very little (if they do anything at all) to improve student’s lives—and empower them to positively and productively influence the greater community and world beyond?

For those who intuitively recognize the self-evident reality that such courses ought to be just as important as reading, writing, and arithmetic, a comprehensive course on LIFE—and its leadership—finally exists.  Self-Action Leadership, Volumes I & II, serve as the Textbooks for this course.

Click HERE to buy your copy of the SAL Textbooks today.

Check out previous versions of the SAL Textbooks below (2006, 2013, and 2015, respectively).  We've come a long way since 2006!  The 2007 version was entitled "Leaders for Life" and was set to go to print by a publisher who dishonestly reneged on our signed contract.  Such is life.  Lesson learned: never work with that guy again.  The 2012 version was my doctoral dissertation. 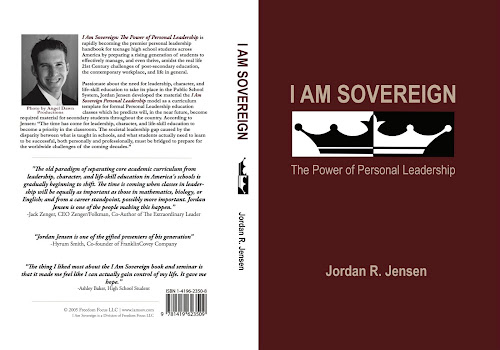 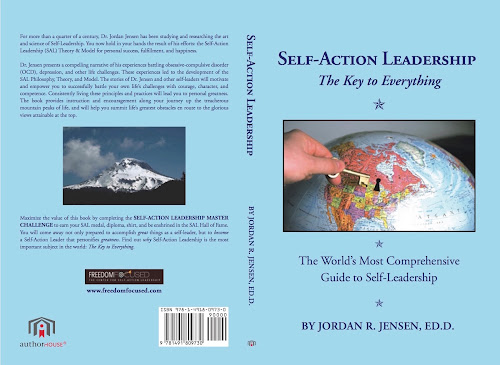 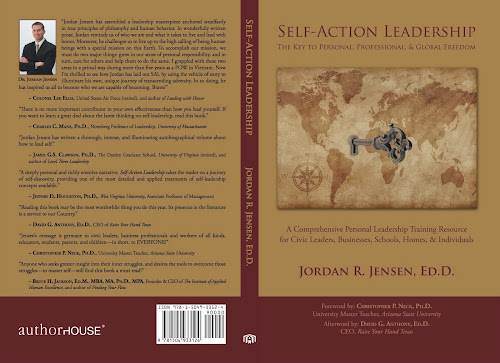