The Satisfaction of Goal Achievement

Last weekend, I traveled to Jackson, Mississippi to run the Mississippi Blues Marathon as part of my SMARTIES Goal.  It was the first of four marathons I plan to run this year in my quest to qualify for the elite Boston Marathon. 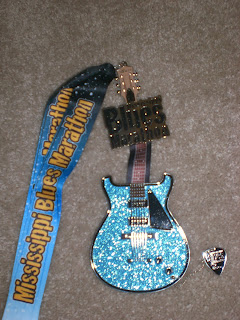 While I still have my work cut out for me to qualify for Boston (I must run under 3:05.00), it was very satisfying to meet two of my goals for the year so early on in January.

Having experienced the defeat and deflation of missing the mark by 70 minutes after my second marathon, it felt pretty good to narrow that margin down to only 14 minutes after my 9th try at the distance.  Most importantly, I ran my best time ever by over 12 minutes.  Getting a new "PR" (personal record) was one of the highlights of the day for me.  It definitely made the hard work feel worth it.

The Self-Action Leadership (SAL) philosophy teaches that self-competition is more important than competition with others, and that it is the only authentic form of fair competition. No two people are exactly alike in this world, so the concept of fair interpersonal competition is really a misnomer.  If you can honestly say to yourself at the end of a day, race, project, school year/program/degree, etc., that you have given your best effort, then you are, at that moment, consummately successful in that area, and there is no comparison in the world that can or should tarnish the joy and exultation of that priceless self-knowledge.  The SAL Theory and Model is designed to always focus your mind primarily on becoming your best, not on bettering the performances of others.

This is not to say that competition with others is bad or should be entirely avoided.  Interpersonal competition has its place, but that place must always be secondary to the intrapersonal competition that motivates you to become your best.  For example, it felt good to know that I finished 28th place out of 827 finishers on Saturday, but I wasn't about to let the fact that 27 people beat me dilute the enormous satisfaction I felt at having just run a marathon 12 minutes faster than I have ever run before.  In next week's post, I will share the journey that led me to change my thinking to focus primarily on self-competition instead of competition with others.

In the meantime, I wish to thank all my readers for being my "Accountability Partners" for my Boston Marathon qualifying goal.  Knowing that I am committed to report to you after each of my marathons this year has already provided me with much positive motivation to invest my best efforts to achieve my goals.  It is helping me, and I thank you!

In consideration of my performance on Saturday, I have adjusted my new goals moving forward as follows:

March 1st Marathon in The Woodlands, Texas: Run under 3 hours and 10 minutes.  Also, lose 15 more pounds prior to race (I've already lost 10; I have 20 to go to be in top form).  This goal will prove the most challenging for me because discipline and temperance with sugar, soda, and other less healthy foods has never been my strong suit.

June 14th Marathon in Provo, Utah: Run under 3 hours and 5 minutes and qualify for the 2015 Boston Marathon.  Lose an extra five pounds to weigh in at #160 or less on race day. (I weighed about #180 on race day last Saturday)